Only two days to see the boat show and there is so much to do! Day 1: Kris and I explored as many different boats as we could, from little handmade wooden sailing dingys to the huge Gunboat catamaran. Kris was most impressed with the Gunboat as well as some smaller Gemini and TomCat catamarans and the Dragonfly trimaran. I couldn’t pick a favorite. Gary and Carol were all about the Shannon but by the end of the day they had changed their minds. They had spent most of their day looking at parts and supplies in the booths, and so couldn’t pick a new favorite. After a full day, we headed back to our boat. Another beautiful sunset stretched across the sky as we left. Day 2: We rode the dingy in once again and tied it up with all the others at the free dock. There’s so many dingys and some are pulled ontop of the one it front of it. It looks as if it’s dingy mating season! Time to last minute shop for supplies! We rushed from booth to booth, looking at survival kits, anchors, boat lights, foal weather gear, and more (Carol and I peeked in at re-sail and other sail bag booths). After looking, we took a break to think about what we would need to get and get a bite to eat – pizza! Spinny made a friends all day, including over lunch.

Then it was back to the show. We came away with two bags full of new things (even Spinny got two new harnesses, one from Paws in town). After shopping, we had just enough time to show Gary and Carol the Gunboat, as well as the two smaller catamarans Kris liked. Then the closing gunshot rang in the air. It was 5 o’clock and the bridge crews were out and about, organizing to loosen the docks that held in the boats. It was time to find a spot to watch the breaking of the bridges! We went to the dock just below Pussers (Carol got her painkiller) to watch the motor boats Push, Pull, Yank, and Tug help move the loosened docks around and let the sailboats motor out into the bay. People cheered as the first boats began to leave. One Beneteau couldn’t resist a last minute show off as he turned 360s on a dime in his spot. As the last of the boats began to leave, we headed over to town for cheeseburgers and fries. The very last Island Packet left just a little after dark. The sailboat show was over, but the power boat show would soon begin. A few of the power boats were headed in already as we prepared to leave for our boat. Tomorrow will be packed with action again, this time getting our rental car, walking about town, taking the boat over to the marina on Kent island where it will wait for the Krasnoskys to return in a week. Our first leg of the trip (and my only leg of it) is coming to a close.

One thought on “Annapolis Boat Show!”

Back in the States! Cape Canaveral, Florida 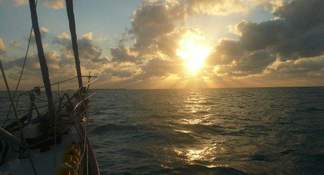 April 7, 2011 We sailed all night from Great Sale Cay in the Bahamas to Cape Canaveral, FL. Kris and I took the night shift from 8-5 and Gary and Carol took over in the morning. By morning we had made it into the Gulf Stream. At the heart of the Stream the current pushed … Continue reading →